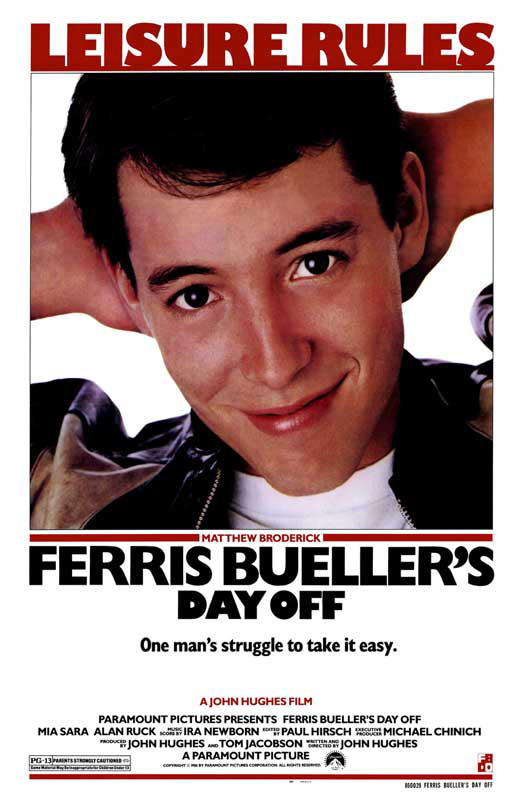 A high school student, Ferris Bueller (Matthew Broderick), wants a day off school and has acted in convincing his parents he is very sick and is unwell to attend school, and takes advantage of his parents’ sympathy to pull off his plan. He then talks his very unwell friend, Cameron (Alan Ruck), who is genuinely sick, into taking his father’s Ferrari as-well-as Ferris’ girlfiend, Sloane (Mia Sara) to Chicago for the day.

I am going to be completely honest here, I had not seen this film until very recently, and I questioned myself as to why, and I do not have the answer to that, as I found this film rather funny, and I love 80s classic films, this is certainly one to fit that category!

This film is a great example, along with many other great 80s classics, which defines what a great film actually was, before all the remakes, and everything politically corrected like many films nowadays are like, aside from a fair few. This film shows the harmless fun of a teenager who just wants a day off school, without causing drama, or violence, but rather just faking a sickness so he (Ferris) can spend the day with his best friend, and girlfriend, on a nice day out and making it back before his parents find out, which he manages to do!

I did enjoy this film, I laughed a lot at the scenes, and at the end credit scene with Principle Rooney heading home, after being defeated from trying to catch Ferris out on his day of skipping school, and being picked up by a school bus and being humiliated further by a group of school kids, and Ferris asking why we are still watching him and to “go home” as the show is now over.

Overall, this film was an enjoyable one, and I regret not watching it sooner than I did – but hey, at least I watched it now, that is all that matters, and if definitely in my favourite 80s movie genre, alongside BTTF films, and The Goonies!

This is free to stream on Netflix, in HD, which is where I watched it from.

I rate this film 5 stars!