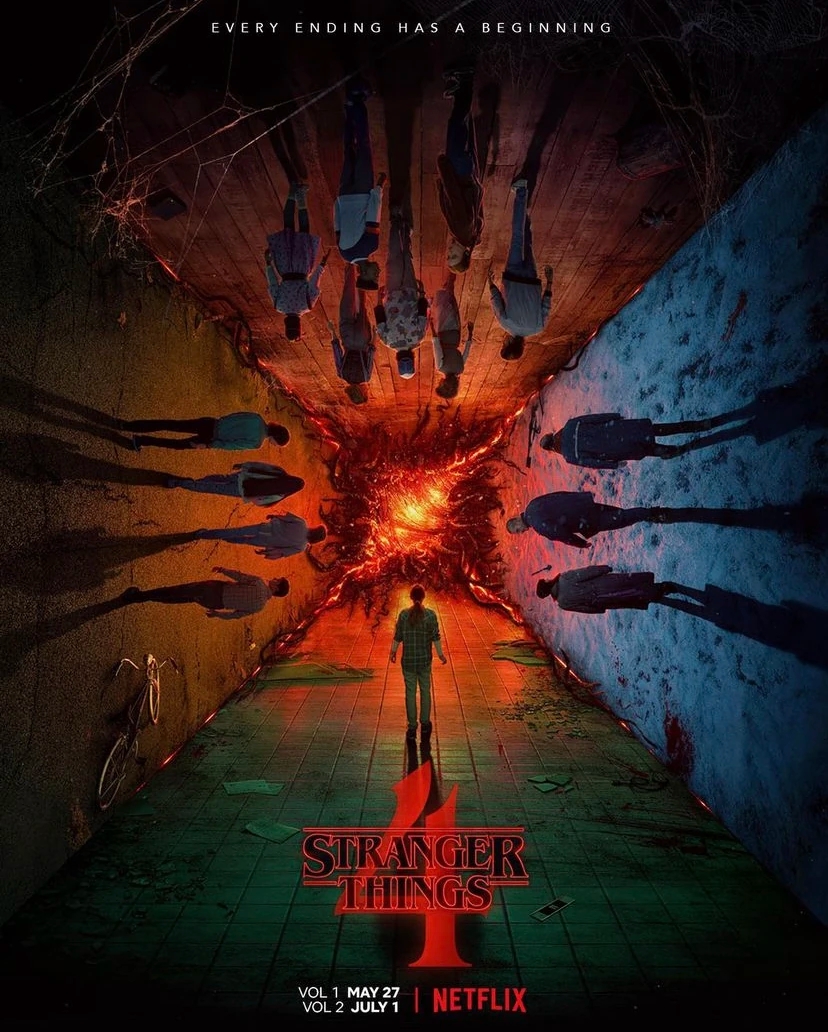 I thought I would do a review on this show, as I am currently obsessed with this season, and overall the show itself, and have been meaning to write a review for ages – just haven’t found time until now.

For those of you who, for any reason, haven’t watched this yet – I highly suggest you do. It is one of THE BEST shows Netflix have kept going – and the Duffer Brothers are amazing writers and producers.

The premise of this show revolves around a young boy (Noah Scnhapp) who disappears (from S1) and his mum (Winona Ryder), a police chief (David Harbour), and his friends all discover supernatural forces, and confront this in order to get him back and to try and save the town they live in, called Hawkins.

This show is where the phrase “the upside down” has stemmed from, as-well as obsessions revolving the show, the monsters, and recently from S4 – Eddie Munson, who will be sincerely missed in the final series!

I could sit here for ages just explaining everything about this series but what fun would that be to ruin it for anyone who reads this review who has yet to watch it, or even finish it.

But, since Season 3, I have waited eagerly for S4 and it did not disappoint, but the only scenes I found uncomfortable were when El / Jane / Eleven was a target to bullies at her new school in California, where I felt her anger and isolation going through that. Bullying is never a nice thing to experience, or even watch, and to see this happen with El broke my heart as I really wished her powers came back sooner so she could have scared Angela and her friends.

Moving on from this, my favourite episodes were “Dear Billy” – Max has really become a massive favourite of mine, and its not just because she has the same colour hair as me, but because shes fiery and “mean” as one of the police offers said after they interviewed her at the Byers home (when Dustin, Lucas and Max were found by the lake and were questioned about it). But, this series has also expanded my love for many characters, even Nancy – the final episode I absolutely loved how unhinged she was shooting Vecna at the end!!

My obsession with Steve has increased too, he went from a character I didn’t really like who bullied Jonathan to a character that is now known as babysitter Steve, and the friendship that has been developed between him and Dustin has stolen my heart – I love it. I do also love how Erica has now become part of the team after she refused to be involved in S3, lol “Just the facts”…

Robin has also fast become one of my favourites too, I love how honest she is and the developed friendship between her, Steve and Nancy is also my favourite. I just love everything to do with this show, and the character developments of the OG’s.. But I am Sad about Max, I hope she is OK for the final series, she is obviously going to be needed in S5 else the Duffers would have killed her character off, Eddie would not have made it though due to how many people in Hawkins were after him for “murdering Chrissy” which was untrue, but its sad he died in the way he did – RIP Eddie.

This series has seemed to have gained so many more fans which is amazing! This is what the show is, amazing! If you haven’t seen it yet, then what are you waiting for? It is currently streaming on Netflix now, as-well as the previous three series.

I thoroughly love this show, and I am so excited for what the Duffer Brothers will bring us in the final series, in 2024!!!

What are your opinions on this series? I would love to read the opinions, as I find it interesting what others have to say on this series, so please leave a comment and let me know, lets get a few chats going 🙂

If you guys enjoy this show as much as me, I highly suggest watching “Stranger Things Crack” on YouTube, very funny! – You’re Welcome :).

I rate this TV show 5 stars! Amazing show, I love it.