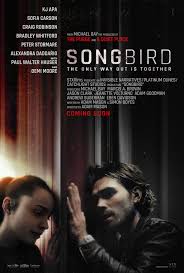 A film based in the near future, 2024, where a new pandemic named “Covid-23” has ravaged the world and inner cities. Songbird focuses on a number of people who seek to navigate through specific obstacles set in place, and into law, which is affecting society, disease, quarantine, and vigilantes.

For a film focusing on a pandemic, it was not one of the best I have seen, considering Contagion (2011) was a lot better and was way before our current situation with Covid-19, this film focused solely on a young couple who were in love, one trapped in a flat with her sick relative and the other who had a immunity band and also a delivery courier cyclist.

I am unsure whether we are ready for any COVID movies yet, and if we are, this film was unfortunately not one of them, I found it extremely difficult to focus, and with our current situation within the UK right now I thought this film would be a lot better and I was disappointed.

However, this film highlighted a future of a pandemic, where the infection has become so bad, that people get killed if they are seen leaving their homes, so I guess at the moment we are not in that situation – and hope we never will be. The only people who are allowed to be outside of their homes are the ones who are immune to the virus, and they are ones who deliver parcels to rich people. But there are also people in the film who are not rich, so it brings the question of how do they manage to get their food and drink, as they somehow have cupboards full of food and a fridge full of drink, which makes me wonder how they are getting their supplies. Soon enough, it is quickly known the real villain is not the virus but is the Head of Sanitisation, which is he introduced early in the film.

So, I was not entirely impressed upon watching this film and found it hard to focus but managed to sit it through. I did feel there was no real story behind it, no in-depth information of the new COVID-23 virus, other than what was briefly mentioned at the start with a new report camera shot. There had been no further information on it and felt it left the viewers guessing whether it is similar to our current situation with COVID-19, with the new mutated strain, and the new virus from South Africa to knowledge too. There had been no further update on the COVID-23 virus, featured in this film, for viewers to know more on it, to understand the film a little more, as I would have liked to know a bit more about it.