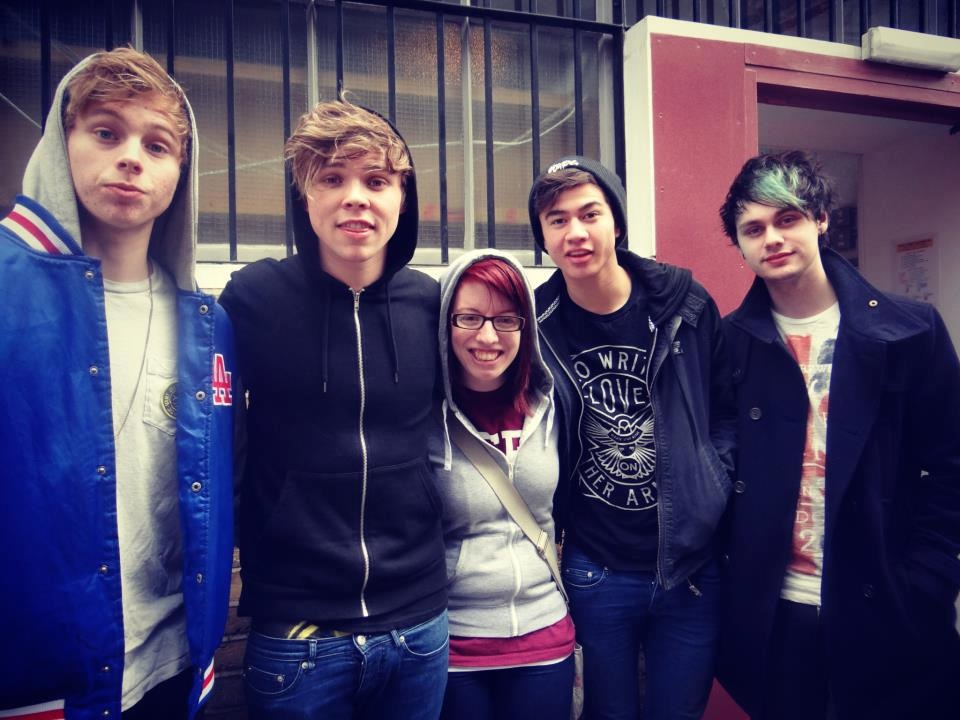 By now, if you have read my previous blog entries, you will know that 2013 was the beginning of very many stories of me and my experiences of meeting celebrities, and some who are very well known too. However, this particular entry is a very special one of mine, as I am proud to say that I met and became good friends with 5SOS from the start of their career before they became famous across the world. It all started on a random chance of seeing Mike and Ash outside a rehearsal studio when my friend (at the time) was waiting to try and meet Niall from One Direction!

It all started when I, and a few others, were waiting outside a rehearsal studio in West London, in the hope of meeting Niall from 1D, as it was rumoured he was there. Whilst we were waiting, I noticed two lads coming out of the building, and I recognised them, to where I realised it was Michael and Ashton from 5 seconds of summer, so we stopped them and spoke to them for a while, and I asked where Luke and Calum were, but they were at home.

After this, I decided to try and meet them as much as I possibly could, and as Calum was my favourite I really wanted to meet him, which happened a month after meeting Ashton and Michael, and a short while after I travelled to Birmingham to try and meet them all (there were a lot of fans waiting by the stage door – across the road from the back of the arena, waiting for One Direction, and I was the only one waiting for 5SOS), to where I never had the opportunity to catch them but did have the opportunity to give their tour manager – Al, at the time, a bag of goodies I had for 5SOS. Whilst I was waiting, one of my friends at the time was roaming around Birmingham Town Centre looking for Luke and Ashton, as they both tweeted saying they were at Nandos, so my friend managed to find them, and she called me whilst I was waiting at the arena stage door and spoke to Ashton over the phone. I remember trying to keep my cool, but my palms were sweating, and I was trying to keep myself together, and I remember asking Ashton when they were due to at the Arena as I had presents for them all, and he said they were on their way soon. Here is the photo my friend, at the time, took of Ashton on the phone to me:

I still remember this moment, as right after the call, I needed to sit down, and the girls I started talking to, who were hoping I meet all of 5SOS, all hugged me and congratulated me and said that I need to hang around now for them to arrive. Which is what I did. Unfortunately, I never managed to meet all of 5SOS at this moment, but someone came out from the arena who happened to be 5SOS’ tour manager, at the time, called Al, who took my bag of presents which he kindly gave to 5SOS when they arrived at the arena. I remember nearly missing my train at Birmingham New Street when Calum and the 5SOS band account tweeted me to thank me for the gifts. I distinctly remember this happening so fast, as I was sat at a charging port in New Street to charge my, at the time, iPhone 5s (HAHA!), when I noticed the tweet came through and then my phone LITERALLY went crazy, with tweets such as “OMG SARAH!” and “OH MY GOD THAT’S AMAZING” I was sat there, scrolling through as much as I can before having to find the platform and board the train I needed to get back to London. I don’t think I looked up from my phone the whole journey back, it was that crazy on my Twitter mentions and feed!

Later that evening, that same evening, I had a tweet through from Calum (which came through as a text message notification too – yes twitter had this activation back in 2013) thanking me for the Family Guy DVD and that he was sat watching it in bed, but then deleted it. I managed to screenshot the text message I had, and also the tweet someone grabbed for me.

I thought to myself, after this, I have to try everything I can to meet them now, especially Calum! A few weeks later, I had the opportunity to meet Calum, and bless him, when I mentioned the Family Guy DVD he immediately realised it was me who gave the gifts and hugged me so tight. I remember he was greeting a few other fans who were around, and saw me, and asked me if I wanted a photo when I said yes and asked him if he enjoyed the DVDs I gave them from Birmingham, he placed his guitar case down, and hugged me, I honestly never felt more of a loving hug than that from anyone, I still remember that every day!

After this, it was clear I was on a road of meeting them regularly and having a great relationship with them all, in a friendly and respectable way, which is exactly what happened.

I then ended up in Manchester with 5SOS a short while after this. As I had transferred to a different University which was more into London, I ended up getting accommodation that was relatively close to where they were living for the time they were in London, and knowing this, I left them alone when they were in their own domain, which I think ended up in them like me more, because I never crossed boundaries, or demanded anything from them, and took opportunities to see them often, when they were at rehearsals mainly, which worked in my favour, as I built a solid relationship with them until more fans started appearing and ended up becoming jealous, to where some even said some rather nasty things, which of course, I mentioned to the lads. Ashton told me not to worry as I should know they all love me dearly, which set me at ease a little. I did create a great trust in their tour manager, John, too, which was nice, and I remember one time he gave me a small back of guitar plectrums to hand out, and I was mobbed, literally, crowded for plectrums, which I am sure I still have a few somewhere in my room or in a storage box in my home.

It’s just a shame that when 5SOS eventually ended up going back to Australia after being in London and writing their first album in the UK, touring a few times, where tickets were cheap as chips. Their song Heartbreak Girl was filmed in London, everything changed after they went back to Australia. When they came back to tour with 1D everything had changed and it became more difficult to meet them regularly. I eventually went through personal issues of my own, and moved away from London, in 2015, to complete my studies after experiencing bad levels of anxiety.

I am now gearing up to be reunited with them on their tour, which hopefully will resume in 2021, as it has been 6 years since I saw them last. They have changed so much, as have I, so I am really excited to hopefully see them again, I really miss them dearly, but I am also super anxious they won’t remember me, but I hope they will!!