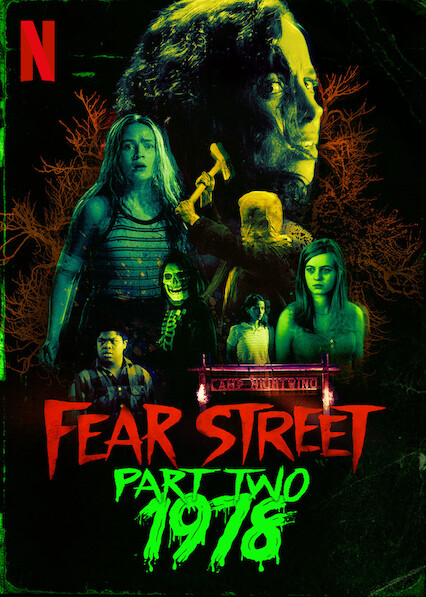 Its 1978, its Summertime and its time for Summer Camp, at Shadyside, called Camp Nightwing. Activities for the summer are about to begin, but these soon come to a halt when another resident from Shadyside becomes possessed with the urge to kill, and what usually is a summer of sun and fun, turns into a gruesome fight for survival!

Unlike the first film, I was much more into this film, the casting, wardrobe, language etc has been much better directed!

I really enjoyed this film, so much more than Fear Street Part 1, and I am a fan of Sadie Sink, I like her in Stranger Things, and her casting for this role in Fear Street Part 2 was spot on! Unlike the first film with the casting, this one seemed so much more relaxed, and easier to become involved in the story!

This Part Two does not hold back on the murders, the slashing, nor the gore, which was more like how I expected these kind of films to be like! I was not disappointed! If you are like me, and you enjoy horrors which have blood and gore and all that is in between, then i can 100% assure you will enjoy this film.. it has plenty of fear, gore, blood, etc, and I feel this film is what horror films are all about – not cutting back. If people don’t like this sort of thing, then please just don’t watch it, do not ruin it for others by complaining – this is what horror films SHOULD be like!

Definitely a step up, by miles, from Fear Street Part One – I very much enjoyed this Part Two A LOT better!!!

I rate this 5 STARS